What is ANOVA (ANalysis Of VAriance)?

One-way (one factor) ANOVA with Python

For this experimental design, there is only factor (treatments) or independent variable to evaluate, and therefore, one-way ANOVA method is suitable for analysis. 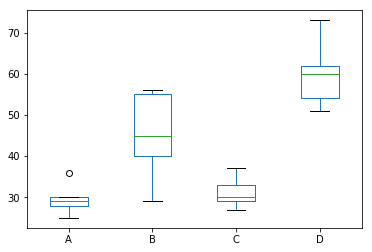 Interpretation: The P-value obtained from ANOVA analysis is significant (P<0.05), and therefore, we conclude that there are significant differences among treatments.

From ANOVA analysis, we know that treatment differences are statistically significant, but ANOVA does not tell which treatments are significantly different from each other. To know the pairs of significant different treatments, we will perform multiple pairwise comparison (Post-hoc comparison) analysis using Tukey HSD test.

Above results from Tukey HSD suggests that except A-C, all other pairwise comparisons for treatments rejects null hypothesis (P-tukey<0.05) and indicates statistical significant differences.

As the P-value is non significant, we fail to reject null hypothesis and conclude that data is drawn from normal distribution.

As the data is drawn from normal distribution, use Bartlett’s test to check the Homogeneity of variances. Null hypothesis: samples from populations have equal variances.

As the P-value (0.12) is non significant, we fail to reject null hypothesis and conclude that treatments have equal variances.

Levene test can be used to check the Homogeneity of variances when the data is not drawn from normal distribution.

From dataset, there are two factors (independent variables) viz. genotypes and yield in years. Genotypes and years has five and three levels respectively (see one-way ANOVA to know factors and levels).

For this experimental design, there are two factors to evaluate, and therefore, two-way ANOVA method is suitable for analysis. Here, using two-way ANOVA, we can simultaneously evaluate how type of genotype and years affects the yields of plants. If you apply one-way ANOVA here, you can able to evaluate only one factor at a time. 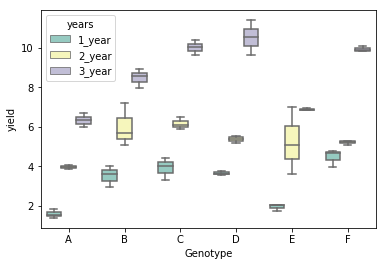 Note: If you have unbalanced (unequal sample size for each group) data, you can perform similar steps as described for two-way ANOVA with the balanced design but set `typ=3`. Type 3 sums of squares (SS) is recommended for an unbalanced design for multifactorial ANOVA.

Similar to one-way ANOVA, you can use Levene and Shapiro-Wilk test to validate the assumptions for homogeneity of variances and normal distribution of residuals.

If you have any questions, comments or recommendations, please email me at reneshbe@gmail.com

This work is licensed under a Creative Commons Attribution 4.0 International License.

You may also enjoy